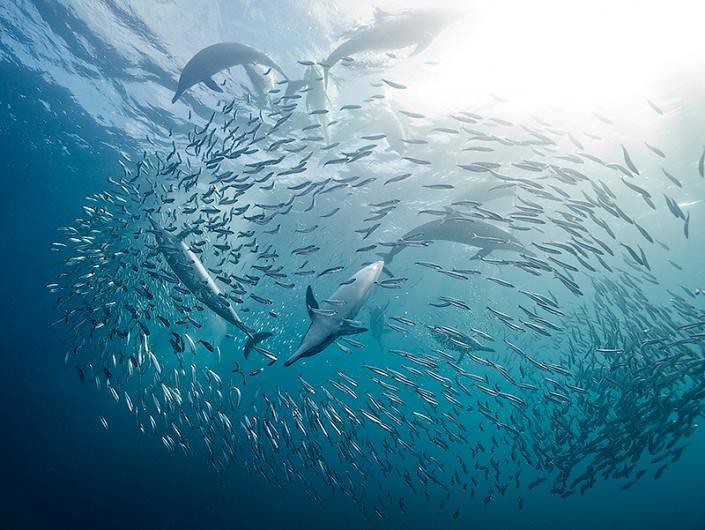 This spectacular event, considered the “Greatest Shoal on Earth,” involves the movement of hundreds of millions of sardines from their cool-temperate core range into the warmer subtropical waters of the Indian Ocean, on South Africa’s east coast.

The sardine run is triggered by the upwelling of cold water on the southeast coast and as they swarm north they get sandwiched between the coast and a southward-flowing hot current that exceeds the sardines physiological capacity. They are then predated by huge numbers of dolphins, sharks, seabirds and even whales, an event that has featured in many nature documentaries.

A new study in the journal Science Advances by South African and Australian scientists tested the hypothesis that the Sardine Run represents the spawning migration of a distinct east coast stock adapted to warm subtropical conditions. The scientists generated genomic data for hundreds of sardines from around South Africa, including data from regions of the genome that are primarily associated with differences in water temperature along the coast.

The results showed two sardine populations in South Africa, one in the cool-temperate west coast (Atlantic Ocean) and the other in warmer east coast waters (Indian Ocean). Each regional population appears adapted to the temperature range that it experiences in its native region.

“The cold water of the brief upwelling periods attracts the west coast sardines, which are not adapted to the warmer Indian Ocean habitat,” says author Professor Peter Teske from Johannesburg.

This visually breathtaking migration run attracts tourists from around the world who are keen to get a glimpse of the underwater spectacle, but it may not be around forever.

“Given the colder water origins of sardines participating in the run, projected warming could lead to the end of the sardine run,” says Professor Beheregaray. Despite the huge numbers of fish involved, the run involves only a small portion of the South African population so while it’s end would mean the loss of one of nature’s most spectacular migrations, the effects on the population as a whole are likely to be negligible.